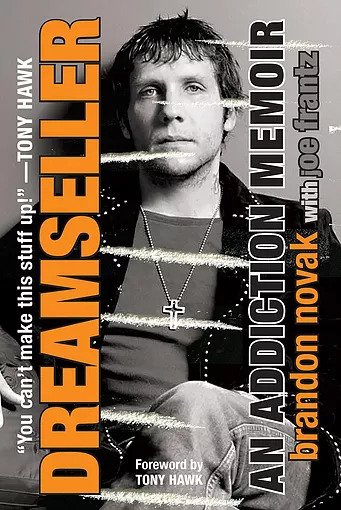 Get your copy of Brandon Novak’s book, Dreamseller now. A memoir of Brandon Novak’s life, Dreamseller recounts all of Novak’s ups and downs, including his rise to fame, downfall from substance abuse, and eventual triumph over his addictions. Insight to his successful career as a professional skateboarder and television personality will keep readers entertained, but his detailed account of his battle with drug addiction is what really catches the reader’s attention. Readers will get to see an inside look at the destruction that addiction can cause, but more importantly, they will see that no matter how far you fall, it is possible to come back from rock bottom.

Brandon Novak’s bestselling book appeals to all audiences and is an emotional roller coaster that leaves readers feeling inspired and motivated, showing that change is possible. It is a welcome message of hope for all of those struggling with addiction.

12 in stock (can be backordered)

Skateboarder and Jackass star Brandon Novak comes clean about his crazy rise to fame, tailspin into addiction, and other death-defying stunts on the road to recovery in his book Dreamseller.

At seven, Brandon was a skateboard prodigy. Discovered by skate legends Bucky Lasek and Tony Hawk, Brandon soon had a life that many kids dreamed of. By the time he was fourteen, he was touring the U.S. with the elite Powell-Peralta team, signing autographs, appearing in films, and being interviewed by magazines. By many standards, Brandon seemed to have it all, but it did not last.

After getting hooked on heroin, Brandon’s downward spiral to rock bottom was as fast as his rise to fame. Soon, the once up-and-coming star was living in a garage, begging for change, and hustling to score his next fix. He stole from his family and friends to fuel his addiction and was in denial about his problems. He lived in a fantasy world where he kept telling himself that everything was okay. But it was all a lie.

Brandon Novak’s book is the story of an addict who made it to recovery—a dreamseller who finally stopped believing the lies he was selling and started believing in himself. With the help of his celebrity buddy, Bam Margera of Jackass, Brandon joined the cast of MTV’s Viva La Bam and made an honest reach for sobriety. The road was hard, and like many, he stumbled along the way, but like any great skateboarder, Brandon Novak was always determined to get up again.

Read every surprising detail of Brandon’s story with his own authentic and honest account in Dreamseller.

Updated with a new Epilogue